Can game theory shed light on the Israeli-Palestinian conflict? - barlowbooks

Can game theory shed light on the Israeli-Palestinian conflict? 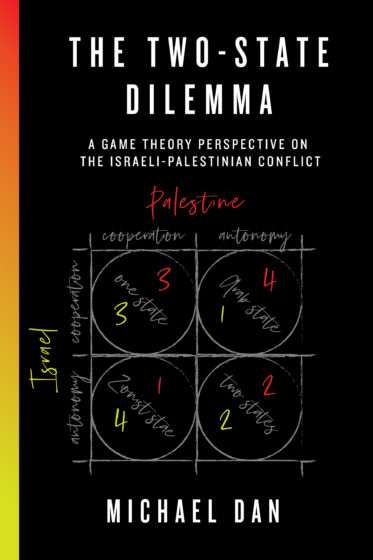 If you’re interested in the Israeli-Palestinian conflict, here’s a fresh analysis from author Michael Dan. He uses game theory to make his case that the best solution is mutual cooperation. Check out the review, just posted on Booklife, a subsidiary of Publishers Weekly.

Peace activist Dan deftly uses mathematical game theory to examine the intractable Israeli-Palestinian conflict, calling it “an unresolvable political paradox.” Dan simplifies mathematical models and philosophical concepts while using them to describe the history of the region and its peoples. Through the lens of game theory, he discusses how irrational and inefficient decision-making has persisted over time. Asserting the impossibility of independent states in “tiny Palestine,” he makes a strong case for mutual cooperation in a single state while acknowledging that such an outcome seems unlikely.

Dan’s approach of slowly introducing concepts and applying them to the history of the conflict allows him to build his case while providing background for the reader. He explores game theory not as a way of finding a solution but as an illustration of how different kinds of conflicts play out. In games such as the Prisoner’s Dilemma and Deadlock, illustrated in clear, simple charts, Dan explains the available outcomes as mutual cooperation, mutual destruction, or individual destruction. With regard to the Israeli-Palestinian conflict, he builds to the conclusion that the only path to resolution is through rational self-interest that also seeks to protect others.

Dan, a Canadian Jew, is far from a dispassionate observer, making it clear that he has a personal and moral stake in the outcomes Israel chooses with regard to colonization, especially as Palestinian population growth is set to outpace Jewish population growth (and both populations are already higher than the region can support, he says). He fears the outcome of a true apartheid state, and urges both Jews and Palestinians to rethink finding ways to cooperate. A lack of objectivity does not imply a lack of rationality, however, and Dan’s thorough research on philosophy, history, and genetics reveals two peoples who are more alike than different. This unusual treatise approaches the Israeli-Palestinian conflict with compassion, wit, and a flexible philosophical framework that is both engaging and crystal-clear.

Takeaway: This is an even handed, compassionate, logical, and clearly explained must-read for those interested and invested in the Israeli-Palestinian conflict.

The Two-State Dilemma is on sale at amazon.ca, amazon.com and at stores near you when they reopen. Or you can buy from the publisher at sarah@barlowbooks.com