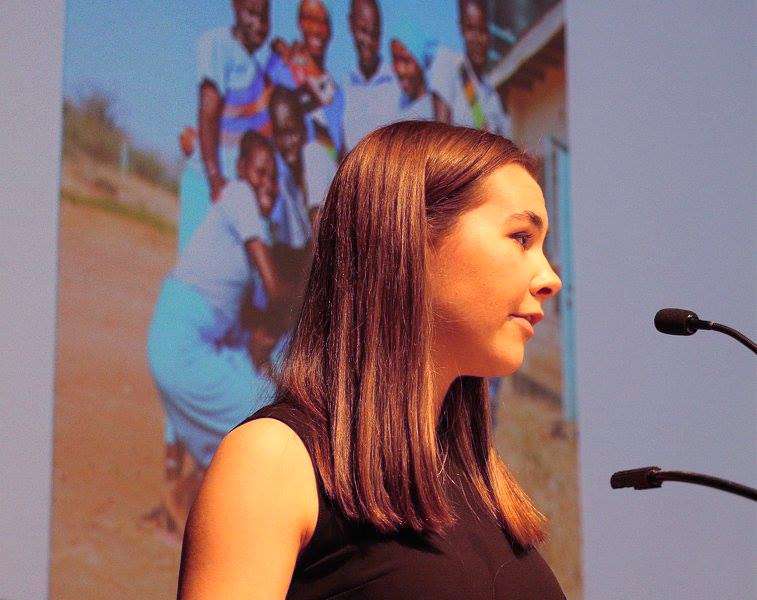 For many writers, getting the opportunity to speak in front of hundreds or thousands of people is the ultimate opportunity to sell books, promote the mission, and potentially earn some money.

Yet most people find that getting that speaking gig is not easy.

So how does a Grade 12 student get two massive speaking engagements in a single day?

Barlow Books author Clare Morneau did just that. On Nov. 9, she’ll be speaking to thousands of young people at the WE Day event in Ottawa. The huge talkfest, designed to inspire people to change the world and transform themselves, is drawing a truly star-studded lineup, like singer Paula Abdul, Margaret Trudeau, Chris Hadfield and Rick Hansen, along with WE co-founders Craig and Marc Kielburger.

Clare got on the WE podium because she’s just written a hit book called Kakuma Girls, about the brave young women who go to high school in a refugee camp in Kenya. Over the summer, Marc Kielburger wrote the endorsement on the front cover of Clare’s book, so that helped the effort to get Clare onto the WE stage.

That blurb, as we call it in the business, helped book sales too. Kakuma Girls, is selling out at stores, perhaps because Canadian readers are heartened to see a 17-year-old Toronto girl reach out to girls her age a world away at a time when Donald Trump, along with the Brexit leaders in the U.K., are turning their backs on people in terrible trouble outside their borders.

After Clare gets off the WE Day stage, she’ll shake a few hands, sign some books, and then fly to Toronto for another speaking opportunity. This time, it’s The Walrus Talks, the fantastic series of talks organized across the country by the organization that publishes the multi-award winning magazine, The Walrus. Getting Clare onto the Walrus stage wasn’t too hard after I told Shelley Ambrose, publisher of The Walrus, about Clare’s book. She was just perfect for the theme of the Walrus talk in Toronto—Africa’s next generation.

Clare will get less than 10 minutes to tell her story alongside some very serious thinkers about Africa, including a medical doctor, a university professor and a couple of scholars.

If you think that at 17, Clare will be nervous about sitting in the company of people like this, think again. In between studying for exams and preparing university applications, she has been doing the rounds of media interviews with remarkable composure and poise. Perhaps she learned this from her father Bill, Canada’s finance minister. What’s more likely is this: Clare can tell an authentic and appealing story because this book comes from her heart, and her experience creating a long-distant friendship with the Kakuma Girls through a series of letters.

Isn’t it amazing what the power of the word can do?

By the way, all proceeds from Kakuma Girls go to the education of the girls at the Kakuma Refugee Camp.

Kakuma Girls is Heather’s Pick
Next