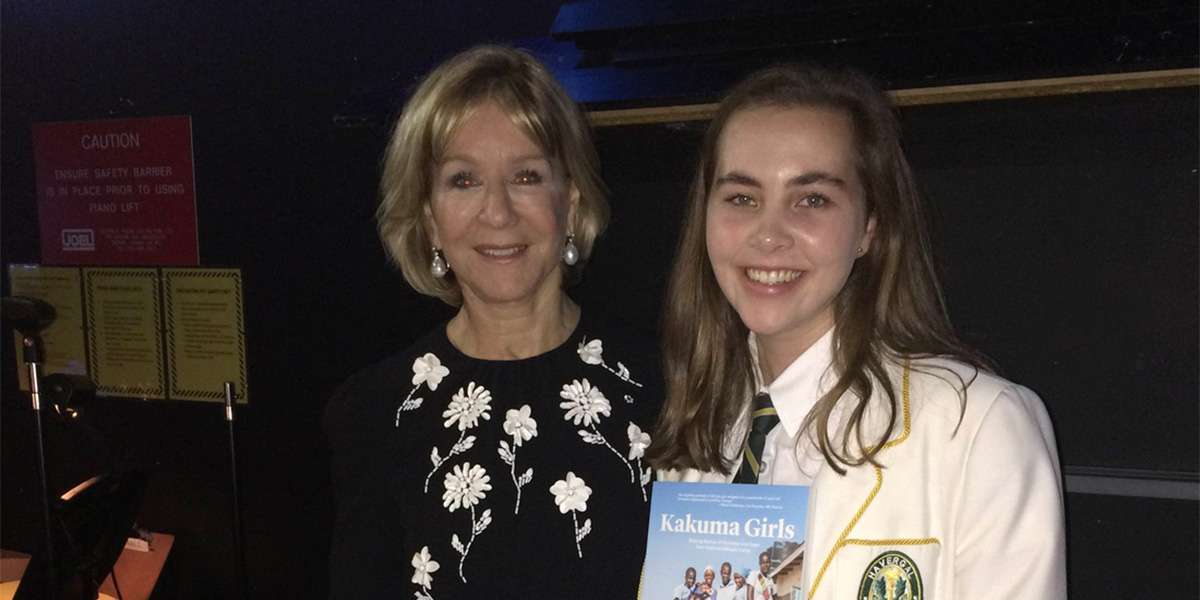 So it is with great delight that I can share the news that Barlow Books author Clare Morneau’s new book, Kakuma Girls, has been chosen as a Heather’s Pick, just in time for the holidays.

Heather of course is Heather Reisman, CEO of Indigo, Canada’s dominant bookseller. Every year, Reisman chooses a handful of books to promote in her stores. As she told Toronto Star: “I get asked all the time, do you really pick your Heather’s Picks?” she says. “And it makes me smile because I am so careful about what becomes a Heather’s Pick and it only has to be something that I love like crazy.”

It’s a huge boon for book sales, and the author’s profile.

So how did 17-year-old Clare Morneau win this accolade for her first book?

It started long before Clare came to Barlow, with superb editing by Carole Devine, brilliant photography by Ugandan photographer Jjumba Martin, and wonderful book production by Doug Laxdal of The Gas Company Inc. a graphic arts specialty studio based in Toronto.

At Barlow, we worked with Clare and her team to get Kakuma Girls into Indigo and other stores via the expert sales team led by Rob Dawson at Georgetown Publications.

But the story of how Clare’s book became a Heather’s Pick is best told by Alina Duviner, the PR specialist handling the project. Duviner contacted the events and marketing team at Indigo and begged them to let Clare present the book in person to Indigo managers. They came back with something far better: Clare could speak to the Indigo managers’ summit in October. This was when store managers from across the country would come to Toronto to meet with the Indigo executives, including Reisman.

When Clare arrived at the summit, there were only two other authors invited to speak: Retired Canadian astronaut Chris Hadfield, and Giller Prize winning novelist Joseph Boyden. Both have written huge best sellers. It was extraordinarily impressive company for a Grade 12 student. Then up on the stage, Clare told her story about how she became pen pals with the girls at Kakuma Refugee Camp. These brave girls came from half a dozen war-torn countries, where they endured unimaginable hardship. And yet, through their letters and interviews, they showed indomitable spirit as they imagined their futures. “It was so moving.” said Duviner. “There wasn’t a dry eye in the house.” Duviner has heard Clare’s story many times, “but even I was crying.”

Reisman was touched. She had already read Clare’s book after Clare hand-delivered it to her in the spring. After listening to her story, Reisman decided on the spot to make Kakuma Girls a Heather’s Pick. Kakuma Girls was perfectly aligned with Reisman’s own philanthropic mission, For the Love of Reading, which is dedicated to putting books in the hands of children. “She was inspired by Clare, by such a young person using a book to deliver an important message to youth from youth,” said Duviner. Here was a prime example of “the power of literature for youth.”

As soon as Heather’s Pick was announced, Indigo ordered another batch of books and started putting the Heather’s Pick stickers onto the books in stores, where they are getting prominent display on Heather’s Kids Pick tables.

​It’s a rare and thrilling story. We couldn’t be more proud of Clare and the whole Kakuma Girls team.

How to Get That Op-ed Published
Next