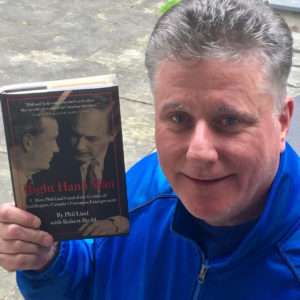 Ted Rogers, the late founder of the Rogers communications empire, and Phil Lind, his right hand man, have a few things in common in the book department.

Both were finalists in the National Business Book Award competition. (Right Hand Man, published by Barlow Books, has been nominated for the prestigious award this year.)

And both wrote their memoirs “with” Robert Brehl.

The “with” means Bob worked very closely with the two telecom executives to write their memoirs. To succeed, as he did both times, he had many deep conversations with both men.

I wondered what it was like to interview Ted and Phil, so I asked Bob to compare and contrast.

“Ted was CEO when I worked with him, so we did most of the interviews on Sundays, either at his office or his home. My wife called them “Sundays with Ted”, a play on the book Tuesdays with Morrie, and she looked after our young children most Sundays over a 6-month period.

“Phil had finished his operations role, although still on the board, so we met at various times.

“Ted liked one-on-one talks; Phil enjoyed more people around to bounce ideas/stories off. (He saw the world as a marketplace of ideas.) Sometimes there’d be five people around the table. The more people the merrier.” Maybe that’s why there are so many moments in the book that make you laugh out loud.

“Both ways worked well,” Bob continued. “I had fun working with both of them. Indeed, both were exceptional learning experiences for me. I mean how lucky have I been to sit and hear so many behind-the-scenes stories from two remarkable Canadians.

“After Ted’s death, I wrote an afterword for the paperback edition of Relentless: Like many successful entrepreneurs, Ted was an incredibly emotional man, too. Tears often flowed freely. The first time I saw this, we were sitting in his Toronto home talking about his mother, Velma, who had battled the bottle and won, and battled cancer and ultimately lost. Before I knew it, tears were rolling down his cheeks and he was too choked up to continue.

Remembering my own mother’s death from cancer, I became too upset to speak. We just sat there in silence, sniffling, for about five minutes before I was able to ask another question. A few days later, I received the transcript from the recorded interview. It gave me a chuckle; halfway through, it contained the following note from the transcriber: “Mechanical trouble. No audio for long portion.”

Phil rarely showed his emotions, Bob said, perhaps because so many people sat in on the interviews.

“The closest we came to Phil showing emotion was about his stroke.” Phil was reluctant to include his personal struggle in the book, Bob said, but he eventually agreed, if only to inspire other people struck by the same illness. “He got deep into it. But he never cried, and I never saw a tear from him.”