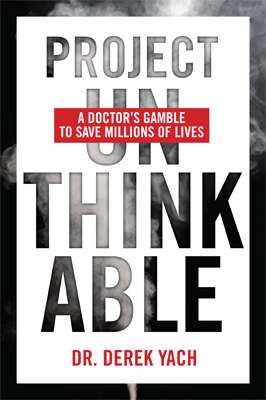 To download, right-click on the link and choose “Save link as” or option-click on a Mac computer and choose save.

A Doctor’s Gamble to Save Millions of Lives

This is the memoir of one of the world’s most effective health crusaders and his lifelong campaign to save lives around the globe. Author Derek Yach started out in a traditional way, at the World Health Organization, where he demonized Big Tobacco for causing the death of millions worldwide. Then, after engineering an international treaty to curb smoking around the world, he crossed the line. In an unorthodox move, he joined Pepsi to help its CEO transform the chips and soda behemoth into a more healthy company. The author’s rationale was this: To save tens of millions of lives, you may have to go inside the enemy corporation to help it change. So when Philip Morris International (PMI) announced it was ready to switch from combustible cigarettes to smokeless ones, a move that could save untold lives, Yach made the most audacious gamble of his long career in global public health.

Project Unthinkable is a biography embedded in several big themes: