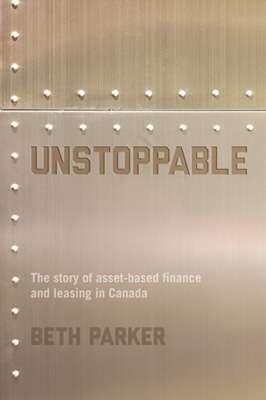 The Story of Asset-Based Finance and Leasing in Canada

Unstoppable tells the previously untold story of a business that has grown to be the largest source of debt financing to Canadian consumers outside of the traditional bank loan. This book covers the rollercoaster ride of asset-based finance, now a $300 billion business, through interviews with business trailblazers such as Jim Pattison and Steve Hudson, who led the industry for the past half century. It is an entertaining and personal business history that will inspire both students of business history and entrepreneurs alike.

Unstoppable shows how this form of finance helped to grow Canada’s former industrial economy. It chronicles the rise and fall of car leasing and the industry’s struggle to stay alive in the depths of the global recession of 2008 to 2009. The business not only survived, it thrived, mainly because of the resilience of the business leaders who were determined to keep credit flowing, even in the worst of times.

Unstoppable is a pioneering look into a vital sector of Canada’s economy. It tells of entrepreneurs: their visions, setbacks and successes. It documents booms and busts, risks and rewards, as leasing expanded with many of Canada’s most dynamic businesses. And it reveals asset-based finance’s importance to the investments that drive growth and support Canadians’ quality of life.

Despite the rocky 2008-9 period that witnessed a major reduction in asset-backed financing and leasing in Canada, the industry has thundered ahead with over $300 billion in transactions today. It is for good reason why this industry is “unstoppable” but to find out, read this well put-together history. It is a very enjoyable review of an industry that is should be understood by any one working in finance.

Around the time that Medi-Dent began to woo dentists and doctors, the founders of U.S. Leasing in San Francisco and its Canadian subsidiary, Toronto-based Canadian Dominion Leasing (CDL), realized that that they could profit by putting together lease deals through their networks of equipment manufacturers and wealthy financiers.

U.S. Leasing, considered the first independent leasing company in North America, was the brainchild of Henry Schoenfeld and his two business partners. A forceful entrepreneur who reportedly seldom took no for an answer, Schoenfeld negotiated a pioneering deal in 1952 to lease equipment to a large food processor. U.S. Leasing grew out of that single deal, he told a newspaper reporter in 1975.

“We thought the company would have one deal and then would die,” he explained. But after the transaction was completed, “someone heard about it and called.… That was the early history of the company. The telephone just kept ringing.” No one was more surprised than Schoenfeld himself. More than two decades later, he commented, “I’m still bewildered by the way leasing has caught on all over the world.”

One of U.S. Leasing’s first employees was Brooks Walker, a classmate of Ned Mundell at Harvard. Walker enlisted Mundell, a Montrealer, to spearhead the company’s expansion into Canada. Mundell opened Canadian Dominion Leasing’s first office at 320 Bay Street in Toronto on June 1, 1959. Like its parent, CDL initially focused on office equipment. It began with addressographs and then moved on to accounting machines, described by Mundell as “the early iteration of mainframe computers.”

Mundell and his bosses at U.S. Leasing initially found it difficult to drum up business from potential customers accustomed to buying equipment directly from the manufacturer.

“We came to the conclusion,” Mundell explained, “that you could spend a lot of time explaining the advantages of leasing, but if the company wasn’t acquiring equipment, the idea wasn’t of much interest. So we decided that you would be much better off if you could put yourself in front of a customer actually looking to make a purchase. We started aligning with people that manufactured and/or distributed the equipment and already had a sales force. We then taught them to use leasing as a tool to sell more equipment.

“By 1961, we had picked up the business model that became prevalent in the United States and Canada going forward. It was called vendor leasing.”

By 1963, CDL had opened branches in Montreal, Toronto, and Vancouver. One of the company’s new hires was a young salesperson called Bob Graham, who had worked at one time for IAC. Graham was “discovered” selling typewriters for RemingtonRand.

“One day, I did a presentation on leasing to a business school and landed three to four lease deals in one month,” Graham recalled. “When CDL found out, they said, ‘We better have a look at this guy,’ and they hired me.”

Graham encouraged his new colleagues at CDL to look on leasing primarily as a way of helping office equipment retailers boost sales. They began training the retailers’ sales teams to explain the advantages of leasing and to promote a single monthly payment for the entire package.

“We emphasized the fact that customers would thank us for teaching them about the benefits of leasing,” recalled Graham. “Our advertising slogan was ‘Don’t put your money into equipment that depreciates. Put it into a sales effort that appreciates.’”

Graham went on to become CDL’s longest-serving president. Under his leadership, CDL expanded across Canada, opening more branches, in Winnipeg, and then Halifax and St. John’s. Graham remembers CDL as “a very respected company and very well liked because people were treated well.”

Succeeded by Jim Davidson, according to one contemporary, Ginter Baca, the two men developed one of strongest sales and marketing teams in the industry.

Meanwhile, Mundell returned to U.S. Leasing’s head office in California in 1965, where he became chairman and chief executive. He remained there until the company was sold to the Ford Motor Company in 1987. Under his stewardship, U.S. Leasing was listed on the New York Stock Exchange and became the largest independent leasing company in the United States and among the largest in the world.

Vendor leasing was clearly here to stay. The strategy of joining forces with manufacturers and distributors to offer a valuable service to their customers would remain a key element of the asset-based finance business, especially for the independent companies.