A Life in Psychiatry - barlowbooks 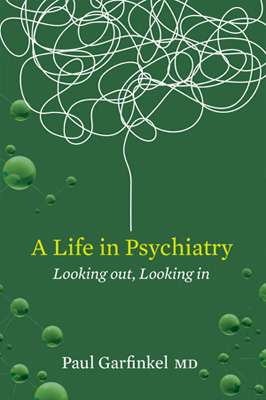 A Life in Psychiatry

Looking in, Looking out

When Dr. Paul Garfinkel started his career in psychiatry in the 1970s, psychoanalysis dominated the profession. Then the pendulum swung the other way. Psychoanalysis was discredited and drugs became the treatment of choice for mental illness. Throughout his career, Garfinkel has struggled to find a balance between these two poles, between compassion and human touch on one hand and the rigour of science and the prescribed drugs that have revolutionized psychiatry on the other. Though it was sometimes not popular, he held steadfast to his belief that medicines combined with psychotherapy are often better than either one alone.

In this deeply personal memoir Garfinkel writes about his journey through a 40-year career and life devoted the to the understanding, care, and advocacy of the mentally ill. He takes us through the many stages in his life, from his humble beginnings in Winnipeg as the son of Jewish immigrants, through to medical school, his internship at Toronto Western Hospital, his rise to leadership positions at many institutions and eventually as the first CEO of the Centre for Addiction and Mental Health (CAMH).

With candour, Garfinkel gives us insights into the life of a psychiatrist and reveals the challenges facing many practitioners, including “burn out” and the intense pain they feel when a patient commits suicide. He probes some of the most controversial subjects in the profession, such as the outrageous sexual abuse of patients. He shares his thoughts on the qualities needed to be a good psychiatrist and a good leader. He reflects honestly on some of his professional missteps and the breakup of his own marriage. Garfinkel passionately urges his colleagues to speak out, support the patients, and work toward removing the stigma of mental illness, hopeful for the day when people with mental illness are treated like anyone else who is suffering and in pain. A Life in Psychiatry is a fascinating insight into the world of mental health care from a devoted and compassionate pioneer.

We can never forget that psychiatry, like all of medicine, is a helping profession that aims to improve the physical, mental, spiritual, and social well-being of human beings. Psychiatry is concerned with illness but also with the texture and drama of the human condition. Yet the art of medicine, the caring side, is easily dismissed in a scientific world. This was true then, and it still is true today. Caring in medicine can be neglected at a time when the pursuit of science has brought us powerful and effective new treatments. I believe this is a mistake for our profession. Practitioners need to be healers who connect to patients on a human level. Rather than just focusing on the illness, they need to see people as they are—multidimensional and complicated individuals. They must tailor their treatments to individual patients and never forget that the practice of medicine, while based on scientific evidence, is first and foremost a social interaction between someone who is suffering and a healer.

When we lose this caring side of medicine, we lose the ability to sit and be with people who are ill. A physician in one of our studies put it this way: “I think we have failed, somewhere along the line, to teach our residents how to cope with someone who is suffering. To sit in a room with someone who is crying, someone who is in pain, someone who is psychotic and confused and frightened of you, and I think we hide behind our pills. Because the pills become an interaction that says, ‘I’ll solve this problem for you quickly so that I don’t have to sit with your tears.’”

The challenge to balance caring and evidence-based science is not new. I’ve always been an admirer of Sir William Osler, the Ontario-born and McGill educated physician who was the first professor of medicine at Johns Hopkins and later the Regius Professor of Medicine at Oxford. A great man and an outstanding doctor, he fundamentally changed medical teaching in North America by introducing the clinical clerkship and medical residency. The idea of the residency, with its emphasis on bedside teaching, was borne of his insistence that students learn from seeing and talking to patients.

I have collected the first editions of many of his books and have loved to quote him in my addresses to psychiatrists, especially when I was at the Toronto General. The group there even came to expect it, and when I left they gave me a first edition of his The Principles and Practice of Medicine (1892). In his day, Osler used to complain that doctors relied excessively on treatments that had never been proven to be effective. Since they were not interested in proof, doctors often believed in a particular school of thought, which led to the growth of denominations. Members of denominations resisted the advances of knowledge because they were ideologically committed to particular therapies. Practitioners maintained their beliefs rather than applying new evidence when it was powerful, or testing or refuting it.

This description could fit psychiatry as it was in 1990. We had dichotomous value systems—clinical practice and scientific research. The clinicians were the humanists who tried to understand the complicated human beings in all their dimensions. The scientists thought the cure would come from the lab and the thrilling new insights about the workings of the brain. As the pendulum was swinging from the caring side of the profession to the power of science, the two camps were deeply split.

This wasn’t good for patients or for doctors, so I wanted to introduce a value system and an educational program that integrated both streams of thought. We need science and humanism together—together at the bench and together at the bedside.