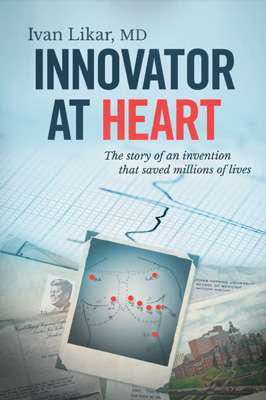 The Story of an Invention that Saved Millions of Lives

This is the story behind the invention of the medical version of the paper clip—the in-motion cardiac stress test, which has saved millions of lives in the last 50 years. It plays out at the legendary Johns Hopkins University, at a pivotal moment in the scientific history of the heart. But this memoir begins in the war, in Nazi-occupied Yugoslavia, where Ivan Likar, a boy with little formal education, had to find his way out.

Ivan Likar brings alive classical medical education leading to a thirst for innovation along with learning. He documents for all to understand the golden age of discovery, application, and life-saving that is contemporary cardiology. All this is seen through the eyes of a field leader making a singular contribution.

At the beginning of the 1960s, cardiology was entering a period of unprecedented and unparalleled innovation. Many of the procedures that are as common today as paper clips were new, or unknown. Cardiac by-pass surgery, for instance, had not been invented or tested. Cardiopulmonary resuscitation, a procedure that schoolchildren learn to do today, was brand-new. In fact, when I was house physician at King’s College Hospital in London in the early 1960s, I was the first person to ever use CPR on a patient. Hardly any of my colleagues at the hospital knew the procedure; I had read about it in a medical journal only a few weeks earlier.

Cardiology was about to take some giant leaps ahead, and Ground Zero was the great Johns Hopkins hospital in Baltimore. It was literally the cradle of what became the modern era of cardiology. I was lucky enough to learn my trade not from books but directly from the pioneers of who were creating modern cardiac history! Doctors like Helen Taussig (acknowledged as the founder of pediatric cardiology), Alfred Blalock and Vivien Thomas, who collaborated on creating the Blalock-Taussig shunt for treatment of blue baby syndrome and were still on staff when I arrived at Johns Hopkins as a wet-behind-the-ears Fellow from London in 1963. It was and remains the most extraordinary stroke of luck in my long career that I came of age as a cardiologist at exactly the right time and right place; it was the happiest and most productive period of my life. It isn’t often that one is lucky enough to feel that one has hitched a ride on destiny’s horse. But I did.

It wasn’t easy, of course. It never is. A child of Zagreb with only a rudimentary education and growing up in the long shadow of the Nazi-occupation, I emigrated to London as a teenager not speaking a word of English but dreaming of one day becoming a doctor. But how in the world would such a thing happen? Mine is a story of ruthless determination and long odds and absolutely extraordinary opportunity—especially from my adopted country of England. It was the generosity of the English that made my dream come true.

It wasn’t only medicine that was changing and making huge headway. The world at large seemed poised for greatness. True, there was much to concern even the most die-hard optimist. Stalin had shown his true colours and proved to have been no better than Hitler. The Cold War seemed at times a very hot war to a lot of us. The Cuban Missile Crisis and the possibility of nuclear annihilation seemed very real. In Baltimore I encountered for the first time in my life the ugly reality of racism.

Still, I mostly remember it as a time of tremendous hope and possibility.

I had cheered with millions of other Americans and Europeans when Kennedy stared down the Russians in Berlin; I had taken to heart the young American president’s selfless challenge to “ask not what your country can do for you but what you can do for your country.”

I believed him. We all did! Nothing was impossible!

And suddenly Kennedy was dead.

In late 2013 I by chance came upon an obituary in the Baltimore Sun. The headline read: Baltimore Internist Developed Stress Test that has Saved Lives Worldwide.

“Dr. Robert E. Mason,” the story read, “a Baltimore internist and cardiologist who developed the standard stress test that has saved countless lives worldwide, died Wednesday of pneumonia at the Brightwood retirement community. He was 95.”

It was like suddenly I had been transported backwards in time. I had known Dr. Mason well in my two-year tenure as a Fellow at Johns Hopkins; he had indeed been a brilliant cardiologist on what was a remarkable roster of brilliant cardiologists. “Dr. Mason’s major medical contribution,” continued the obituary, “was developing the In-Exercise Electrocardiographic Stress Test, which indicated whether the patient had coronary disease that required angioplasty or coronary by-pass surgery. The procedure, once known as the Mason Stress Test, that he developed in 1965, has become a standard part of a cardiac evaluation, and continues to save lives all over the world.”

I was stunned. Now, it is absolutely true that the in-motion stress test described in the obituary has become the standard around the world. It solved what had been an important and until then an intractable problem in modern cardiology, which was how to obtain a clear and safe record of the heart’s electrical function during exercise. In fact, in my practice as a cardiologist I have performed the test many thousands of times myself. Non-invasive, relatively inexpensive, and easily administered, the test remains even today the gold standard for in-motion stress testing—and this more than fifty years since its invention. In fact, I feel confident that I may be more familiar with the procedure than anyone else in the world. I should be.

As a young doctor at Johns Hopkins I was lucky enough to be at the center of the story of how that test came to be. The test is actually called the Mason-Likar 12-Lead Electrocardiogram Stress Test—and it is my name on that test.

But before that story is told there is another story that needs to be told. I am a product of my times, after all.