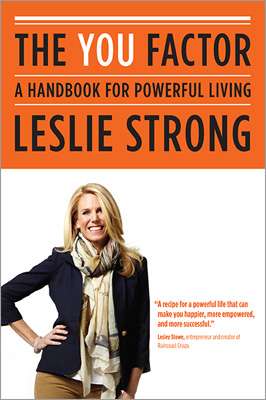 A Handbook for Powerful Living

In The YOU Factor, dynamic life coach Leslie Strong gives you the tools to rediscover your personal power and break down the barriers to self-fulfillment. As a professional life and executive coach, Leslie repeatedly hears stories that illustrate the same point: When you lose power over your life, when you lose control over what you do, you lose some of the pleasure and joy and fulfillment of life itself. The primary lesson of The YOU Factor is that you don’t have to live this way. You can get back the personal power you once had. For many people this is a big shift in perspective. It’s a different mindset because you are used to thinking of yourself as a pawn in someone else’s game. But if you recognize that you are in control of your life, you will find this new mindset is so powerful that it will literally change your life.

If you feel stuck, if you feel that you have lost joy and fulfillment in at least part of your life, there is a way out. The first step on this journey is to look at who is causing things to happen in your life. Who’s the main actor, the protagonist? Is it them—or you?

It sounds like a simple question, but it’s easy to lose sight of who is the main actor in your story.

Here’s an easy example. The teenage son of one of my clients was given a used car to drive around the suburb where he lived. It was a gold four-door sedan, not a very cool car for a teenager, only one step away from a van. One day while he was trying to park at a mall parking lot, he nicked the fender. He quickly called his father. “What happened?” his father asked. “It wasn’t my fault!” the teen cried. “This car is crap! You gave me a crappy car!”

He was blaming the fender-bender on his four-door sedan, and his parents for giving him a crappy car, not his own inability to park in a crowded lot! Now that’s pretty obvious, but we do this more than you might think.

For example, one of my clients had felt powerless and unhappy in her job for many years. She was unable to do what she felt was right for her clients because her boss was a micro-manager and overturned her decisions at every step. And she wasn’t able to be creative in her role because her boss stomped on all her ideas. What’s more, her motivation had drained away as her boss wouldn’t let her do her work in her own way. Now, I’m not saying that any of these complaints were invalid, but what I noticed right away was that the main player in my client’s story seemed to be the boss, not her.

Sometimes my clients tell me that there are a host of other people who keep them stuck. They are the women who feel they have to do it all. They believe that if they don’t do it, it won’t get done, or not the way it needs to be done. They do everything for their kids and husband at home, and for their co-workers at the office. Even if they and their husbands both work, they bear the brunt of the household too. They say if they don’t do everything at home and the office “the places would fall apart.” Are they wrong? I don’t know, but are they powerless and unhappy? Absolutely. Do they think they are the main player in their lives? Not at all.

Occasionally, it’s the circumstances that seem to be the focus of my clients’ stories. Many women I come in contact with have stayed home for years to raise the kids. They now feel that the work world has changed, and they don’t have the relevant skills to get a job. Other women I speak with blame their genes for their inability to lose weight. Others say that they don’t have time to work out, and therefore they can’t shed the pounds. No doubt many of these grievances are valid, but they are dead-end conversa- tions, because the women are not at the centre of their stories.

The problem is never what the people are doing. The problem is always caused by a person or persons, a situation or a circumstance outside of their control.

When you hear any complaint, or when you complain yourself, it’s usually about someone else or something else.