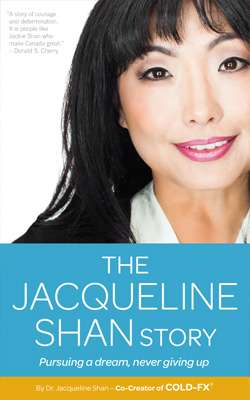 Pursuing a Dream, Never Giving Up

The Jacqueline Shan Story is the wonderful, improbable story of one woman’s extraordinary entrepreneurial career in natural health. A child of the Cultural Revolution, Shan moved to Canada from China in 1987 and set out to prove that natural medicine could meet mainstream scientific standards. After 10 long years of constant challenges and frequent setbacks she succeeded with COLD-FX®, Canada’s top-selling cold and flu remedy, championed by NHL all-stars, legendary TV personality Don Cherry, and Olympian Clara Hughes.

This book describes the peaks and valleys in the life of a female entrepreneur with a big national profile. Shan raised millions of dollars to develop and market COLD-FX®, which would ultimately outsell the biggest brand-name products in the Canadian market. Like many entrepreneurs, Shan enjoyed great success, but she also made mistakes, big public ones. Undaunted, she began again, developing Afinity, an entirely new line of natural health products for an actively aging population, and mentoring a younger generation of entrepreneurs.

Candid, engaging, and frequently surprising, The Jacqueline Shan Story is both an inspirational memoir and an indispensable resource for anyone who wants to make a business dream come true.

We had hired hockey superstar Mark Messier in June 2006, to promote COLD-FX in the United States. I admired Mark in so many ways—a great centre and captain on the Oilers, Canucks, and New York Rangers; a leader; a philanthropist; and a gentleman with great family values. He worked very hard and was always full of energy when we worked together. He was genuinely interested in staying healthy and helping others to improve their health. On one of my trips to New York, he took me to one of his philanthropic initiatives, Hackensack University Medical Center in New Jersey, where a whole building and play area bearing his name was built for children with cancer. At the Mark Messier Skyway for Tomorrow’s Children, Mark had transformed the skyway into a hockey fantasyland, complete with interactive videos, games, and personal memorabilia marking some of his most memorable NHL milestones for the kids to enjoy. Mark walked around greeting some of the children—I could see he was genuinely interested in them. Knowing how important science and clinical studies were to our business, Mark helped us make connections with the hospital’s infectious disease and immunology experts, with whom we collaborated and did another clinical trial on COLD-FX, this time using the doctors, nurses, and workers in the hospital.

Being around Mark was very exciting. For one thing, he and his entire family loved COLD-FX, its story, and the science behind it. He visited our lab, talking to our scientists and jokingly pretended he was a scientist. He listened intently to learn the science of COLD-FX, how it worked on the immune system. When I explained to him how COLD-FX activated the immune cells, serving as a first line of defence against viral invasion, he thought for a moment and said to me, “You mean it works on immune cells to form a firewall?” I replied, “Yes, exactly!” How clever and appropriate of Mark to use immune “firewall” as a layman term.

Once, on the spur of the moment after a day of meetings and dinner in Chicago, Mark asked Norm and me if we wanted to go to a playoff game in North Carolina the next day. We did, so we innocently asked him which airport we should reroute our tickets to. He told us to just be ready in the hotel lobby at 6 a.m. He drove us out to the airport and to a private area, where we jumped aboard his private plane, and with Mark and his family we flew to that play-off game in North Carolina. What a thrill. It was Game 5 of the Stanley Cup finals with the Edmonton Oilers and Carolina Hurricanes! I enthusiastically put on an Oilers jersey, ignored a few boos from the audience, and cheered for the Oilers. Too bad they lost this crucial game, but I was still proud of them for making it that far. Mark even arranged for me to ride on the flight back to Edmonton with the Oilers that same night.

But it was another encounter with Mark in New York that sticks in my mind. I was attending a hockey game with him that night. Apparently my people and his had discussed the possibility of me appearing with him on the ice at Madison Square Garden. But wrapped up in the entrepreneurial bubble (sales, contracts, science, work), I typically hadn’t been paying attention to what they were planning. Suddenly, during the intermission, Mark turned to me and said, “Okay, Jackie, time to walk out to centre ice with me.” I froze in fear. I was terrified I would slip and fall on the ice. But who can say no to Moose? He was so beloved by the New York fans. So I walked out and stood there, awed as the crowds cheered the great Mark Messier with his nickname: “Moose! Moose! Moose!” I thought for a moment they were saying “Boo! Boo! Boo!” to me. But they didn’t even notice me. It was Mark’s moment, and I was just dazzled to have been included. That’s where a great Canadian cold remedy can take you. Right to centre ice.

I didn’t know then, that even off the ice, I was about to slip and fall in other ways.